Bun Bo Hue Recipe or bun bo is a famous Vietnamese soup containing rice vermicelli and beef. It is considered one of the hidden gems of Vietnamese cuisine that is a perfect balance of flavours.

What Is Bun Bo Hue?

The literal meaning of bun bo Hue is beef noodles from Hue in which Bun means noodles, Bo means beef, and Hue is the city in Central Vietnam, from which it originated. While The traditional Bun bo Hue recipe features beef shank and gelatinous pig blood, It is also made from pork bones.

The broth for bun bo Hue is prepared by slowly simmering various beef and pork bones (oxtail, beef shank, pork neck bones, pork feet, and pork knuckles) with a lot of lemongrasses. The fiery spices, created by frying together garlic, shallots, red pepper flakes, shrimp paste, and ground annatto seeds, are added later in the cooking process. Though not conventional, some people even add a ripe pineapple to the broth, thus lending it a fruity, citrusy flavour.

Assembling this spicy bowl of delight is easy. Thick round rice noodles are added to a bowl and then topped with slices of brisket, pieces of ham hocks, and cubes of congealed pig’s blood. The broth is ladled on top and then finished with a garnish of sliced onions, cilantro, shredded cabbage or banana blossoms, bean sprouts, Thai basil, and other Vietnamese herbs.

An authentic component is cubes of congealed pork blood prepared by allowing fresh blood to clot and then boiling it with salt to solidify it.

Banana blossoms are another component that elevates this dish, but you can make do with red cabbage if it is not available.

Ultimately, the sate or spicy chile condiment makes this dish what it is and separates it from a hearty pho; this is why Bun bo Hue is jokingly called pho’s hotter, younger spicier cousin. 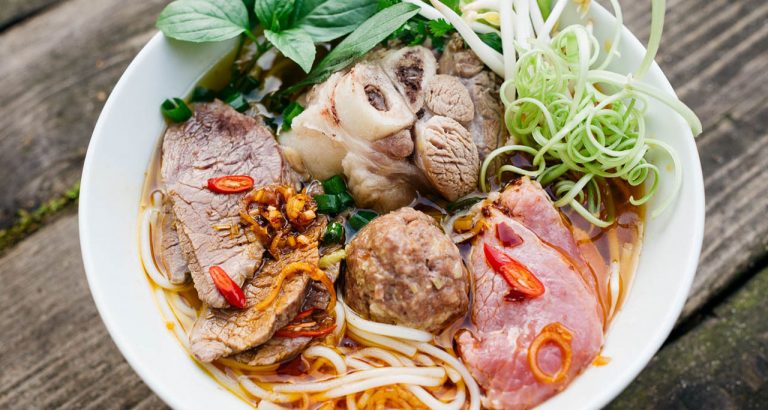 Difference Between A Pho And Bun Bo Hue?

There are several differences between these delicious Vietnamese dishes.

This traditional dish can grace your table at a formal dinner.  Look at our website foodiewish.com for more unique and traditional recipes that you will love to whip up.

We hope you liked our Bun Bo Hue Recipe. For more such recipes information, follow our Blog, foodiewish.com.