Head cheese recipe is not really a cheese but rather it is a jelly made out of animal meat. 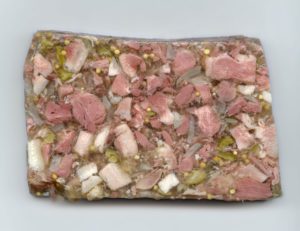 Head cheese is an eastern European delicacy that originated somewhere around the middle ages. It is also referred to as a meat jelly as it uses the head meat of animals such as pig, calf or even sheep. The traditional recipe uses pig head and sometimes the feet and it is prepared by removing all the unwanted bits from the pig head such as the eyes, ears and brain, seasoned with spices, salt and onions and then simmered in a large pot until the meat is tender and falls off the bone. Then this meat is placed in a mould and covered with the stock. The collagen content released from the pig and present in the stock acts as a gelatinous agent thus helping it to bind and form a jelly-like substance.

How is head cheese served?

Head cheese is usually eaten cold such as:

How to store head cheese?

Head cheese can be stored in the freezer for up to 2 months in an airtight container.If it is stored in the refrigerator, it has to be consumed within 3 days.

Hog head cheese varies from head cheese in that it is always prepared using only pig head meat while head cheese may also use sheep or calf head meat. 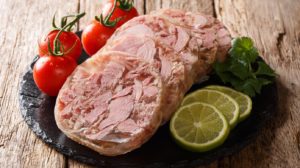 We hope you liked our Head Cheese Recipe. For more such recipes information, follow our Blog, foodiewish.com.