The Haleem recipe is one of its kind.  Not a month in India goes by without celebration. These celebrations bring forth culinary varieties. Ramadan, the Islamic month of fasting. Muslims across the country showcase their cuisine through iftar. One such dish is Haleem. Though its origin can be traced to Arabia, it is available throughout the year in Hyderabad. Haleem is famous in Hyderabad, Kolkata, and parts of South India.

Haleem was recorded to be consumed in the 8th century in the Abbasid Caliphate. The  Haleem recipe can be dated back to the 10th century called Harees (also called Jareesh or Hareesah). Harees recipe can be found in the ancient Arabic cookbook ‘Kitab Al-Tabikh’ (Book of Recipes), popular with Kings, caliphs, and persons of high status in Baghdad. This recipe was similar to the Middle East recipe. Harees became a staple food for many people as the Arab empire moved to various parts of the world. 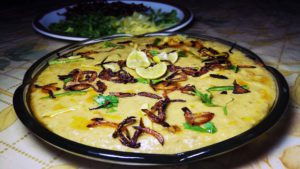 Haleem formed a nest in the Indian subcontinent during the Mughal era. In Hyderabad by Arabian soldiers of the Nizam’s army. Becoming an inseparable part of the Hyderabadi cuisine. A blend of indigenous spices and ingredients gave us the Hyderabadi variation of the Arabian dish. The Barkas in the Arab quarter of Hyderabad still sell Harees, here it goes by Jareesh. The simple Harees dish was enhanced to suit the Indian palate, curating the haleem.

Traditional Haleem is prepared by soaking wheat, lentils, and barley overnight. Korma, a spicy meat gravy, is prepared in a tandoor until the meat tenderizes. The soaked grains are boiled in saltwater till they are tender too. The two are combined and vigorously beaten with a heavy pestle-like into a thick paste-like texture with blended flavors of the spices, meat, lentils, wheat, and pure ghee. The final dish is garnished with caramelized onions, Julienne cut ginger, green chilies, lemon, coriander, and chaat masala. Together it makes a high-calorie and nutritious food, the perfect dish to break a fast. The Hyderabad variation uses a variety of spices and lentils compared to Kolkata Haleem.

Harees, as mentioned above, also goes by Jareesh or hareesah. The Indian variation is called Haleem, which is a name for Allah. In Kolkata, the dish goes by daleem, because people felt it wrong to name a food item by name for Allah. This Ramzan food in some places, however, still goes by Haleem.

The main ingredients in Haleem:

Grain: wheat or barley. Others are lentils. Some regions use rice too.

Meat: beef or lamb or goat or chicken meat is used.

Spices: a variety can be used eg. jeera, cumin, cassia.

Into the hot pot: 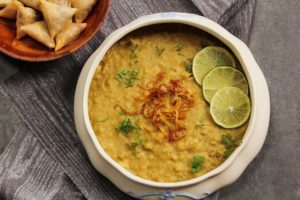 # Replace lamb with mutton keema if you want.

# For wheat, it is easier to use broken wheat.

# While pressure cooking, adjust water this prevents the burning of the cooker.