Bloves sauce recipe is the perfect accompaniment to all your seafood dishes, from simple shrimp to a seafood boil.

You have surely heard of the youtube channel Bloveslife. This YouTuber created this “Blackalicious” sauce, and it catapulted her to youtube star status. She made it to go along with her mukbangs. A “mukbang,” which comes from the  Korean words for eating and broadcasting, is a live-streamed video where the creator eats a large amount of food while interacting with the audience. This delicious sauce featured in her mukbangs became so popular that it is now sold on amazon in a mild or spicy version.

Bethany gaskin or Blove is commonly known as a top mukbang star on youtube and is known for eating large amounts of seafood in her videos. She started doing videos on youtube in January 2017 and since then has amassed a considerable amount of followers and fans.

So, what is Bloves sauce?

Bloves sauce, named after the youtube sensation, is a rich, thick and flavourful seafood butter sauce made with spices, herbs, and other ingredients. 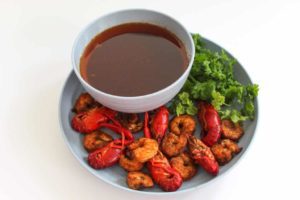 Bloves sauce is a hearty, delicious, and spicy sauce. It goes great with a seafood boil, and if you adore a little heat in your food, you will surely love the taste of this fantastic sauce.

We hope you liked our Bloves Sauce Recipe. For more such recipe information, follow our Blog, foodiewish.com.